An extension of the Indochina Lang Du project from Vietnam, “Hic Domus Est Dei” No.4 (This is the house of God No.4) was constructed in the Bois de Vincennes Colonial Experimental Garden (the Nogent sur Marne colonial garden), Route de la Pyramide, Château of Vincennes, Paris, France. The colonial experimental garden was established in 1899 at Bois de Vincennes to coordinate agronomy experiments and to introduce new factories and production sites. Therefore, coffee, cocoa, vanilla, and banana trees were grown in greenhouses and then transferred to the colonies. In 1907, the venue was converted into the home to five colonial exhibition villages: Indochina, Malagasy, Congo village, Sudan farm and Tuareg camp.

In this work, Le Phi Long used a yellow cloth as the dominant material. The cloth is the main symbol in the Dong Duong Lang Du project (since 2016), and has been carried through many locations in Vietnam. This time, the cloth is brought to Paris as a continuing flow of ritual energy. The yellow color reminds of the first Vietnamese king to journey to France: King Khai Dinh and Prince Bao Dai (who later had an intimate relationship with France) visited the Indochinese Martyrs memorial temple in Nogent sur Marne garden, Paris, 1922.

Long explored ways to knit the cloth and intervene with the performance site, and then chose to drop it on the tree. For him, it demands freedom and simultaneously utters righteous fortitude. The cloth, freely fluttering in the winter breezes, penetrates the forest soaked in history.

This is an incomplete work, which Phi Long use to expand the geographical boundaries of the Dong Duong Lang Du project along with further research. It is he way of raising inquiries and wishing to reveal the colonial path in parallel with the Western missionary path to Indochina. 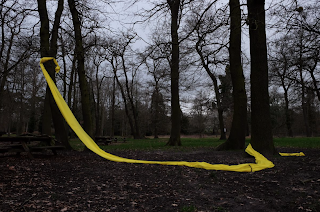 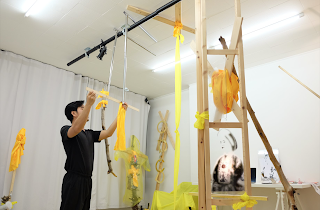 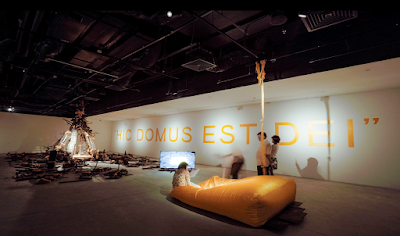